The COMAKT 1080p HD USB wall charger hidden camera is an interesting design for a spy camera. Created to blend into the background as a common charger, it not attracts unneeded attention in most environments. This is an updated version of the previous product, now including motion sensors. Using this features, the CAMAKT will only record for short segments when motion is detected. Doing this will ensure that it allows the CAMAKT only to record and store video that could serve a purpose as opposed to other similarly styled spy cameras that would record in 3 minute segments on time increments that may miss important events or only record pointless footage until its memory is filled. 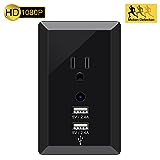 The CAMAKT features a built in 1080p hidden spy camera capable of capturing high quality video when in useIts discreet visuals will allow you to see what goes on around your home, office or business where even and whenever you need to see what’s going on when you are not around, perfect for any covert security needs

Using a discreet built in micro SD card storage, the COMAKT is capable of storing up to 32 gb worth of data to be viewed at a later time.Its simple design is capable of simple implementation, quick and easy to use, it capable of being used straight out of the box.Now supporting a motion sensor, it can be triggered when motion is detected to ensure any captured footage may be of use with happening being captured for viewing later compared to other spy cameras using a similar design properties that would only record short bursts of video at timed intervals.

The CAMAKT 1080p HD has glowing reviews that shows it is an excellent value for money with customers saying “This is an amazing camera. It worked for me right out of the box and the sound quality is incredible. When I was trying it out on the second floor of my house, it managed to catch and record the voices coming from below on the first floor. I am extremely happy with my camera but I plan to get another camera so that I can use them both in the same room in different areas because they don’t capture enough of the room due to the narrow camera ratio.” As well as “It’s an excellent product. When I try to connect it to my mac, I have no issues what so ever and its audio quality was way beyond what I expected.”

The CAMAKT has some large down sides but, after looking over all the reviews available, its price and its good points, the overall judgment on this product is positive. Its low-price point, small size and discreet nature means that it would not attract to much attention when used, especially in rooms that require multiple angle coverage because of the contents within. Plus, with its ease of use, you are not limited to only using it in your house, suitable for use in any environment. Although we should always consider its downsides before implementing them in a room.