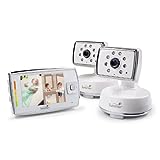 The Summer Infant Dual View Video Baby Monitor offers parents the ability to watch their sleeping child from anywhere in the house. Unlike standard baby monitors, the Dual View baby monitor allows parents to watch their baby as well as hear them. It does this through the use of a night vision camera that wirelessly transmits to an LCD screen. The monitor also offers two-way communication through the use of a microphone in the screen and speakers both in the screen and the camera. This enables parents to talk to their baby and be able to calm it without having to stop what they're currently doing and entering the baby’s room.

The product features a 3.5 inch portable LCD monitor, that, in conjunction with the two cameras included, allows parents to monitor two children in two separate rooms at the same time. This saves the need for parents to have multiple baby monitors for more than one child. As well as this, the product also offers the potential to add another two cameras (purchased separately) to allow monitoring of four rooms simultaneously. All connected cameras can be watched at the same time through the use of the split screen function.As well as visual monitoring, the product also offers parents the facility for auditory monitoring of the child. If only one camera is attached, the audio feed from the camera will play through the screen’s built-in speakers.

However, if more than one camera is attached, parents can choose which audio feed the listen to. The product also offers an “audio sweep” function for when the split screen mode is enabled. This cycles through the audio feed at regular intervals, allowing for parents to hear if anything is wrong with any of the children. The product also features two-way communication, so parents can talk to their babies through the monitors and calm them from anywhere in the house.The cameras themselves both a full-colour daytime mode, as well as a black and white night vision mode. This allows for parents to confidently be able to leave their children alone in a room whatever the time of day. On top of this, the cameras can also pan, scan the room, or adjust their level. This means that when the child becomes mobile, as children tend to do, the parents can watch their child wherever they are in the room.Parents also need not worry about moving out of range of the cameras wireless broadcast, as it boasts a range of 600 feet (182.88 meters), which should be plenty to monitor the baby from any room in the house. However, if the parent does wander out of range of the camera, the screen will display a warning, allowing them to walk back into range and continue receiving the broadcast.
[thrive_custom_menu menu=”59″ title=”Reviews” thumbnails=”off”]

The monitor system has received mostly positive reviews from customers who have used it. One customer said that “this product is exactly what we needed, we can easily monitor both our one-year-old and two-year-old kids.” and another stating that “the sound quality is so good we can hear the hum from our daughter's night light!”

In conclusion, it seems like this product is perfect for parents who want to monitor up to four of their children both in an auditory and visual manner. The remote controlled night vision camera allows parents to be able to monitor their child from anywhere in the room, as well as at any time of day. The extensive range the product possesses allows for the parents to be anywhere else in the house while their child sleeps in their own room, and the two-way communication means that they can talk to their child while not having to stop doing what they were previously doing.However, as this product is relatively expensive, it might be difficult for first-time parents to find the money to buy it on top of everything else they need for their child. This means that, unless parents are lucky enough to be gifted this product by someone else, a cheaper alternative may be more reasonable for them. Aside from this, however, the product seems to be perfect for its purpose, and therefore a good idea for any parents wanting to monitor their children while still being able to do other tasks around the house.