The FLIR ONE Pro positions itself as a thermal imaging camera at the top end of the affordable range; that is it is inexpensive enough to be within the easy reach of everyday users and DIY persons yet offers more quality and precision than models at the very cheapest end of the scale. 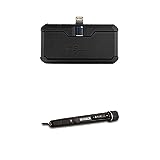 FLIR ONE Pro Thermal Imaging Camera for iOS and Moisture Pen with....
CHECK PRICE ON AMAZON

The most advanced design amongst the ONE series, the Pro version features the new OneFit adjustable height connector alongside FLIR’s traditional rugged design. Additionally, access to the new and improved app offers new tricks and tips for use in different situations, as well as the means for enhanced interaction with the user community and contacts on social media. With this new, added capability it is now possible to see around corners and into tricky spaces through a connection to your Apple watch or Android smartwatch.

FLIR ONE Pro boasts a superior 160 x 120 pixel resolution for the highest quality imaging available in its class, and embraces revolutionary MSX, VividIR (Lightning connector) and image processing technology. It allows the safe and accurate measurement of temperature differences between -4°F and 752°F (-20° to 400°C).

Various useful components come packaged with the product, including USB-C to USB-A charge cable, one lithium ion battery giving one hour of use, a handy Quick Start Guide and a strong protective case. As with all FLIR models the ONE Pro is robust enough to be used on construction sites and around the most testing workplace situations.

In spite of the fact that it is top of the range within its class, FLIR ONE Pro remains a highly economical product in that it provides professional functionality at what is still effectively an amateur’s price. Its multispectral dynamic imaging and VividIR technology combined with high thermal resolution and the added benefit of a new updated app through which to enhance its already multi-faceted operation make it a state of the art piece of equipment unrivalled by anything else of its kidney.

As with all FLIR products the ONE Pro has an interface which is easy even for the unsophisticated to come to terms with, and its resilience coupled with a sturdy protective case will protect your investment wherever it is deployed on site. With a handy USB charge cable, lithium battery and easy-to-follow user guide it comes effectively ready for use, and at a boxed weight of just 322g it is also highly portable and convenient to transport around any venue without difficulty.

Review sites give customers the opportunity to home in on flaws whether great or small, so it is perhaps unsurprising that a host of small issues, real or imagined, should inevitably find their way onto the record.

In a great many cases, whilst offering what we must assume to be entirely reasonable comment, complaints tend to focus upon flaws in individual pieces of equipment as opposed to weaknesses in general design. It is in this category that the largest part of the small minority of negative reviews of the FLIR ONE Pro would appear to reside.

For the most part, customer comments about this design would seem to bear out the claims of the manufacturer, that this is a high-quality and reliable product being sold at a price sufficiently competitive as to make it viable for small, private individual users as well as for professionals.

The availability of the new updated app which assists in problem solving as well as sourcing lots of handy advice is a particularly notable feature in many of the positive reviews. Users were also clearly impressed by the product’s robustness which make it a viable tool for use in a busy construction environment.

What appears to have impressed most users however is simply the sweeping range of integrated features, and the uses to which this modestly-priced piece of kit can be put, whether in a work situation or simply around the home. Versatility and durability are the two qualities which stand out most prominently amongst a long list of plaudits and accolades.

By common assent the FLIR ONE Pro is the best of its kind, offering higher resolution imaging and even more sophisticated technology than other models within its field. This fact is reflected by the slightly higher price that it commands, although it remains very much within the reach of the hobbyist and everyday DIY user.

Significantly, the FLIR ONE Pro features the Lepton Thermal microcamera, which boasts four times the resolution of the standard third-generation FLIR ONE. Combined with the company’s celebrated MSX imagery, which offers clearer and more detailed thermal images, and FLIR VividIR, this version offers the clearest image of any FLIR ONE design.

Some of its features it shares with simpler models. Like the cheaper Pro LT version it is drop tested from a height of 1.8 metres and is further protected by a tough carrying case which renders it entirely suitable for most construction environments including open building sites. Also like others within its family it comes with the necessary operational components such as cables and batteries.

A key advance in these later designs is the inclusion of the OneFit adjustable height connector, a bit of kit which can be attached over most cases without them having to be removed, and the ever-popular updated app. The ability to link up with Apple phones and tablets is also, of course, a seminal feature.